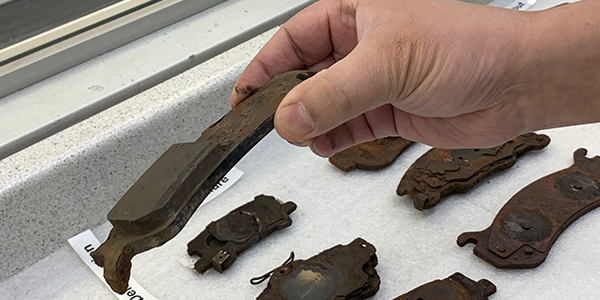 You know what rust and corrosion look like, but what is it? Why does it cause holes in some metal parts while causing others to seize? It is not a simple answer. Understanding the mechanics of rust and corrosion is critical in repairing the vehicles and preventing corrosion from happening.

You know what rust and corrosion look like, but what is it? Why does it cause holes in some metal parts while causing others to seize? It is not a simple answer. Understanding the mechanics of rust and corrosion is critical in repairing the vehicles and preventing corrosion from happening.

Corrosion is a perfect phenomenon that affects all material. It is a process called oxidation that can occur to metal, rubber and even plastic. It is essentially oxygen and other elements in the environment attacking the parts of a vehicle.

In its stable state iron ore is, for the most part, always rusted or oxidized. This is iron’s natural state where it is the least reactive.

When the ore reaches the foundry or mill, it is smelted in a furnace. Carbon and other elements like chromium and nickel are added to the mix to make an alloy of steel. The steel may go through further processes to improve other characteristics like hardness and corrosion resistance.

Then it is stamped into rolls, sheets or plates and then shipped to a location where it is stamped and formed into the final product. In the case of a brake pad backing plate, it is typically stamped with large hydraulic and mechanical presses. For brake lines, the steel is rolled, welded and brazed to seal it internally. All of these manufacturing steps add energy to transform the raw ore into a finished product.

Call it entropy or thermodynamics – like all things in nature, even metal wants to go back to its natural state. The iron from the ore seeks to release the energy that was put into it during the manufacturing process and return to being an ore. This time around, it will not end up in the ground; it will end up in the gutter or on your shop floor as flaky rust.

Corrosion on the brake components is not normal. Rust is a sign that a critical layer of protection has failed. Corrosion leads to a transformation of the surface of the material and eventual erosion of the metal.

For brake lines in the late 1990s, many manufacturers switched to a mild steel line that was covered with a plastic coating. The coating worked to prevent corrosion until it was damaged. When being sandblasted by road debris compromised the coating, corrosion took hold and worked its way under the coating causing it to flake off. Eventually, corrosion would erode the metal and cause the line to burst, and the brake pedal would sink to the floor.

The solution for the OEMs was using better steel, galvanized plating and better coatings. Also, OEMs got better at protecting the lines with splash shields.

Corrosion can affect the bond of the friction material with the steel. It can cause the friction material to detach or delaminate from the steel of the backing plate. This often happens in an area of the pad or line that is not protected by paint or plating. Like the brake lines, once corrosion has taken hold, there is no stopping it.

In a worst-case scenario, the corrosion causes a large portion of the friction material to separate from the backing plate. This can increase the stopping distance of the vehicle.

There are two ways to prevent corrosion on backing plates. The first way is to use better grades of steel alloys that contain the optimal mixture of raw components and have fewer impurities. For example, the quality of the steel and how the steel is milled can cause oxides or “mill scale” to form on the surface of the finished steel. When the brake pad backing plate is stamped, or a brake line is formed, these precursors of corrosion could be driven into the steel used for the final brake pad. These oxides are like carcinogens that start small, but can cause a tumor.

The second method to prevent corrosion is to apply an outer layer to prevent the environment from interacting with the steel and causing oxidation. External coatings like paint or plating only work if they are attached properly. The more resistant the outer layer is to heat, mechanical and chemical damage, the lower the chance of corrosion.

If you are inspecting brakes on a vehicle, don’t assume rust and corrosion are normal. Take time to look at the critical areas like the brake lines, and pull the caliper to look at the brake pads to make sure the corrosion has not attacked the area where the friction material attaches to the backing plate.

What Is Behind Wheel Bearing Noise?

Tips For Investing In A New Tire Changer

Regen Takes Its Place In The Brake Market

Brake Corrosion Science: Why Rust On Brake Lines And Pads Is Not Normal

Communicating The Effectiveness Of TPMS