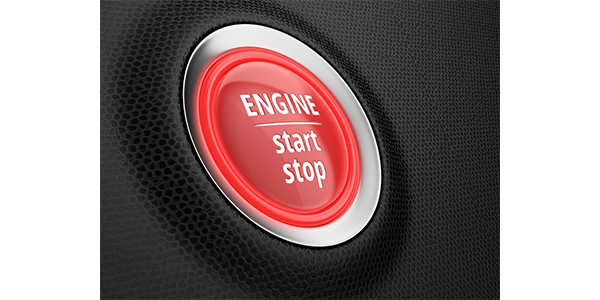 A vehicle with a stop/start system is coming to your bays or might already be there. These systems can improve fuel economy by 5-12% depending on the driving habits of the customer. For your shop, it is essential to understand what is different on these vehicles and how it might change your diagnostic approach.

A vehicle with a stop/start system is coming to your bays or might already be there. These systems can improve fuel economy by 5-12% depending on the driving habits of the customer. For your shop, it is essential to understand what is different on these vehicles and how it might change your diagnostic approach.

When the engine stops so does the alternator. The battery must run the HVAC, infotainment and other systems with little or no disruption. Most stop/start systems use a deep cycle aggregated glass mat battery (AGM). This type of battery requires different testing methods and shop chargers. Some systems use a second battery to handle non-starter loads so the customer doesn’t notice any disruption to HVAC or audio.

Managing the temperature inside the cabin is critical. Roasting a driver for better fuel economy would not be a good idea. When the engine shuts down, the HVAC system is looking at the outside and cabin temperatures to determine if the engine needs to be started to power the A/C compressor or if the auxiliary coolant pump needs to be turned on to pump hot coolant to the heater core.

New oil standards from the OEMs, API and ILSAC have new tests to help measure if the engine oil protects components like the camshaft, crankshaft and the bearings during stop/start operation. Most of these tests measure how the oil sticks to the surfaces. Also, engine manufacturers are using electric pumps, accumulators and valving to keep the oil flowing and prevent too much oil from draining into the pan. Turbocharged engines that have a stop/start system have a pump that circulates oil to prevent it from coking up in the housing and lines.

Imagine if a stop/start car shut down and once the driver lifted her foot from the brake pedal the engine did not restart. To prevent this from happening, stop/start systems have three or more ways to measure the condition of the battery. The first measurement is voltage coming from the battery. Second, the system measures current and loads at the battery with coil winding like a current clamp on the positive battery cable. Third, most systems measure the temperature of the battery directly or through data PIDs for underhood temperatures.

With this information, the ECM can predict if a stop/start cycle is possible. It is also a very good indicator of the health of the battery. Many systems will turn on a battery life indicator if it detects a low battery.

High-end stop/start systems use a large generator/motor combo between the engine and transmission to turn the engine and generate power. But, the majority of systems are using a starter that looks a lot like a conventional starter.

These starters operate the same way but with some critical internal differences. The first thing you will notice is that the gear on the starter is larger and the gear reduction system is lower. This allows the starter to turn slower, which reduces wear on the brushes and bearings. Also, the armature and bushes are upgraded to improve the longevity of the starter.

With improved engine position sensors and gasoline direct injection, the ECM is able to do a neat trick. Since the system knows the position of the piston and valves, it can use the fuel injector and spark plug in the cylinder to “nudge” the engine over to make life easier for the starter. The system will look for cylinders that are on a downward stroke. When the engine needs to start, a small amount of fuel will be injected and ignited to get the engine moving.

Some stop/start vehicles are using an auxiliary water pump to move the coolant in the block, head and heater core so the engine will not be heat soaked from the coolant not moving.

A stop/start system is not just one module. It is a complex strategy among many modules sharing information from cabin humidity to crankshaft position to determine what happens at the next stoplight. For the technician, it means that serial data communication bus and electrical diagnostics will be much more important in the future.