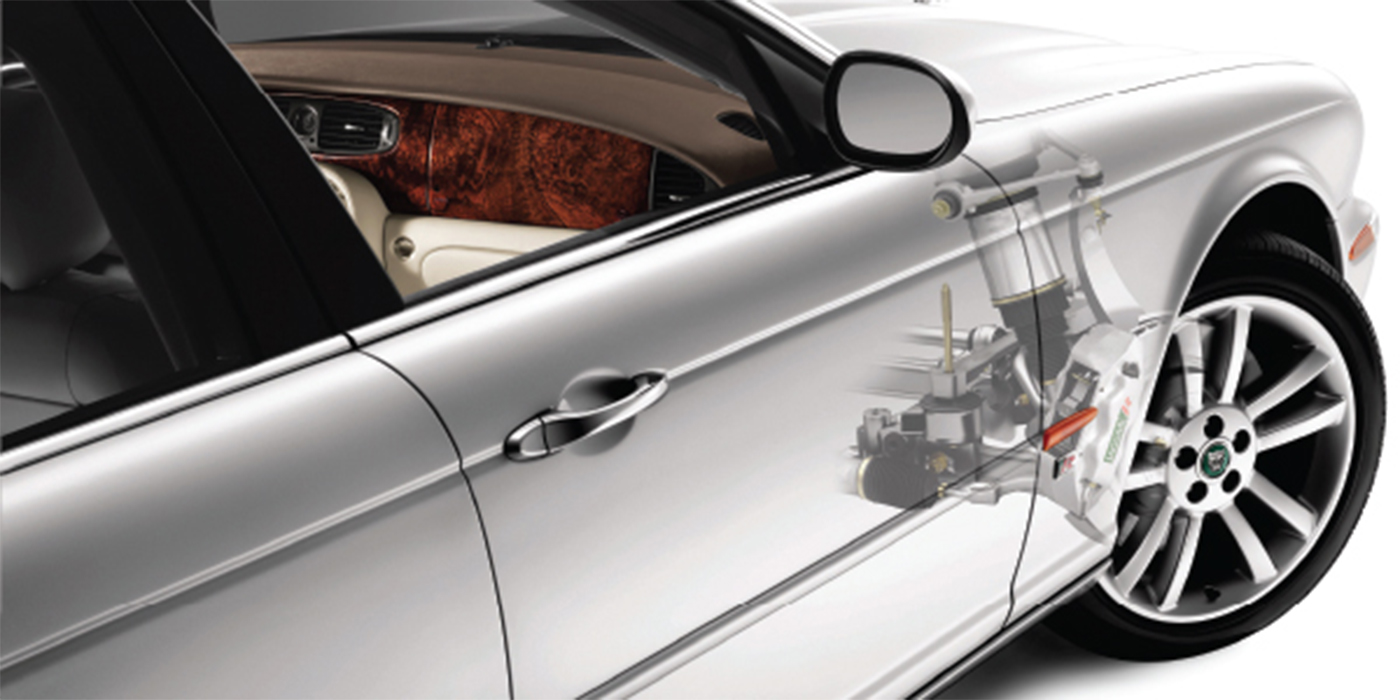 The 2004-2009 Jaguar XJ8 and XJR were the first and last Jaguars with four-corner air ride suspension.

The 2004-2009 Jaguar XJ8 and XJR were the first and last Jaguars with four-corner air ride suspension. The system used in both does more than just control ride height – it optimizes the air pressure in the bladders and the valving in the dampeners to achieve the best possible ride and handling.

When the system is functioning correctly, the vehicle rides and handles like a dream, but if the suspension has issues with the mechanical components or sensors, it can undermine the driver’s confidence in the system.

Behind the rear seat is the Air Suspension Module (ASM). This module is on the CAN bus and talks to the ECM, ABS and other modules for information.

The driver does not activate the modes, the ASM switches abetween them. The modes are changed when the car starts, parks and reaches different speeds. The system can even detect if the vehicle is being jacked up and will stabilize the inflation in the air bladders.

The Strut and Shocks

It is difficult to spot leaks on the air ride units. The air bladders are well protected behind shields and bellows. Typically, you will see leaks at the base of the bellows and at the top of the unit.

The piston in the shocks and struts has an actuator that controls the flow of oil during compression and rebound. Two wires run down the center of the shaft. The signal driving the actuators is a pulse-width modulated voltage. The changes in the valving happen in milliseconds as the suspension moves.

The actuators receive a bias voltage signal when the ASM modules wake to test the circuit. Many codes for open and shorts can be generated if the actuator, wiring or connector is damaged.

The ASM is connected to only seven sensors. There is only one pressure sensor on the reservoir and two verticle accelerometers at the right front wheel arch and in the left rear of the trunk. 2004 models have four ride height sensors. In 2005, they removed one sensor in the rear.

The ASM uses information from the ABS/stability control system sensors on the CAN bus. The ride height sensors have three wires for power, ground and signal. The sensors can fail and cause codes.

The wiring and connectors can increase in resistance due to water intrusion and corrosion. If there is an issue with high resistance, it might cause that corner to ride higher than normal. But if a limit is reached, the ASM goes into a safe mode in which  the pressure in the air bladder is kept at a preset level. Always check the resistance in the circuit before replacing a ride height sensor. The sensors also need to be calibrated after a suspension repair.

The compressor is located under the front bumper on the driver’s side. The XJ uses a dry compressor with a single-piston. The phenolic ring on the piston wears over time until the compressor can’t generate the same pressure as when it was new.

The air compressor does not directly fill the air bladders. The compressor fills the reservoir in the trunk under the spare tire, which is then used to trim the pressure in the air ride units.

It is common for a failing Jaguar Air Ride System to set a code and display the message “Vehicle Too Low.” This message appears when the suspension drops below a specific level. If it does appear, the car should not be driven because the airbags could be damaged. The best recommendation is to let the car run for 20 minutes. The compressor will switch on and off during that period to raise the vehicle.

If the car does not raise in 20 minutes, there is a massive leak or the compressor is not working. This condition and message can also occur when the temperature drops and the air inside the strut or reservoir contracts.

“Air Ride Fault” is the most common message that will appear in the driver information display. The message typically comes on once the driver achieves speeds of 25-35 MPH. The message will go away if the car is parked for 30-40 minutes.

The code C2302 or C2303 will be stored in the history for reservoir or level plausibility error. The criteria for the code is based on the amount of run time of the compressor, the pressure in the reservoir and the amount of pressure lost during a correction to the ride height. Also, the ambient air temperature plays into the equation. If the math does not add up, a plausibility code is set. The air ride system will go into a safe mode and limit corrections to conserve pressure.

The code can indicate a leak or the compressor is worn out. In rare cases, it can mean the pressure transducer in the reservoir is defective.