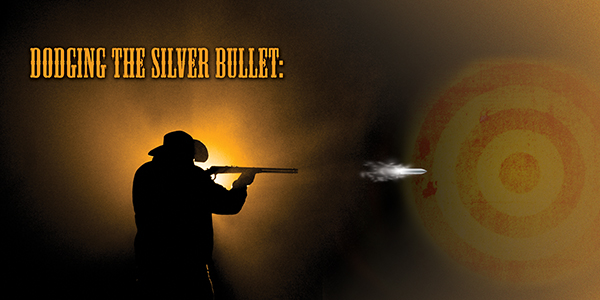 While understanding the symptoms of a failure are key to diagnosing the failure itself, replacing an expensive component based upon a symptom rather than a set of factual data is a very risky and expensive proposition. So, in the world of advanced diagnostics, it’s important to begin dodging the Silver Bullet solution as a diagnostic tool.

There’s a shortage of advanced diagnostic technicians and for good reason. On a mental and attitudinal level, many of us are still living in the 1970s, adjusting valves each 4,000 miles on air-cooled Volkswagen Beetles. Suddenly, we find ourselves in the 21st Century servicing import vehicles that need little maintenance other than an oil change and visual inspection each 10,000-15,000 miles. Today, a 2019 vehicle might theoretically need just one spark plug, one brake friction, one tire and one coolant replacement for each 100,000 miles of driving.

Most important, vehicle reliability has increased to the point that scheduled maintenance services are now estimated to be about 70% of an average shop’s workflow. From my viewpoint, the remaining 30% of the service market is repairs intended to remedy vehicle malfunctions and customer complaints. Practically all of these repairs will require various levels of diagnostic expertise ranging from basic driveability, such as diagnosing a bad fuel pump, to advanced diagnostics which are required to diagnose complex CAN bus, driver assistance and body control problems like those found in higher-end European vehicles (see Photo 1). 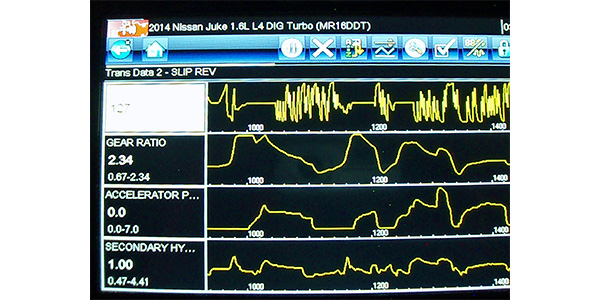 The reason we have a shortage of advanced diagnostic technicians is because our current management models haven’t taken into account the need for technicians who have a deep understanding of the complex connectivity, infotainment, advanced driver assist system, and other issues associated with modern vehicles. Instead of paying technicians to solve complex problems, our management models are dedicated to paying mechanics to change parts. As for technician education, we’re looking at a structure that doesn’t deliver information sequentially and in order of ascending difficulty.

In the not-so-distant future when electric vehicles expand their market share, powertrain and body control issues will concentrate what we now call “advanced diagnostics” into a specialty. In short, the tech changing the engine oil won’t be the tech diagnosing the intermittent CAN bus failure on the rear hatch control module of Grandma’s new electric vehicle (EV.) That said, the objective of this Month’s Diagnostic Solution is to better understand where we’re headed by looking at the attributes of what we’re now calling “advanced diagnostics.”

OLD-SCHOOL HABITS
During the pre-1996 OBD I days, many on-board import engine diagnostics consisted of as few as 12 diagnostic trouble codes (DTCs). Accurate service information was also very difficult to access. Most DTCs merely indicated open or shorted-to-ground circuits. OBD I software engineers were challenged to develop on-board diagnostic strategies that could detect sensor calibration issues and, in some cases, impose default operating strategies that would keep an engine running until it reached a qualified service facility (See the June 2018 issue of ImportCar, “The Diagnostic Detective”).

The formative period of on-board diagnostics circa 1979 caused many technicians to view electronics diagnostics as “Black Magic” rather than as a science based upon math, chemistry and physics. Thus, the well-known and infamous “Silver Bullet” diagnostic solution began to appear. Unfortunately, Silver Bullet diagnostics left us with some bad habits, among which are symptom-based diagnostics.

DODGING THE SILVER BULLET
While understanding the symptoms of a failure are key to diagnosing the failure itself, replacing an expensive component based upon a symptom rather than a set of factual data is a very risky and expensive proposition. So, in the world of advanced diagnostics, it’s important to begin dodging the Silver Bullet solution as a diagnostic tool (see Photo 2). 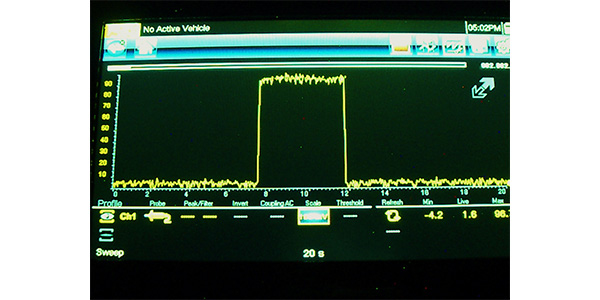 Photo 2: Advanced diagnostics requires “thinking out of the box.” This square waveform gave me an exact amperage draw and the time base gave me a major clue as to the cause.

The days when paperback manuals from automotive publishing houses and TSBs from auto parts suppliers were our main sources of Silver Bullets are long gone. Nowadays, we should be relying upon instant on-line TSBs and factory service information, in addition to professional networks like the International Automotive Technicians Network (iATN).

As a matter of simplifying the wiring harnesses, engineers integrated powertrain and body control functions with the fuse and relay boxes. So, instead of powering the headlamps directly through a mechanical switch, we now use a light switch that commands the BCM via a bus communications network to switch on the light relay mounted in the under-hood fuse box. The more features a vehicle has, the more “electrical command” centers will be incorporated into its electrical architecture, which brings us again to advanced diagnostics.

INTELLECTUAL CURIOSITY
Advanced diagnostics isn’t a nine-to-five job. I find myself spending several hours each day keeping up. And every new job is a learning curve. Without intellectual curiosity, we’re not going to take that next step needed to master a specific operating system or, for that matter, to learn a new technology. I’d say that intellectual curiosity and open-mindedness to new ideas is a prerequisite to succeeding at advanced diagnostics.

I haven’t counted lately, but I’m estimating in rounded numbers that over 2,000 different vehicle models are offered in the domestic market each year. Within a 10-year service span, we can find ourselves trying to master 20,000 different vehicle platforms including their body control electronics. Not many techs have the photographic memory and the power of instant recall to efficiently diagnose that many platforms.

STEM-BASED EDUCATION
The ability to process large amounts of information is paramount in today’s complex service market. In fact, we’re deluged with new service information each day and if we’re not prepared to sort it out and prioritize it, then we’ll become overwhelmed by it.

In a word, everything we touch in modern automotive architecture involves math, chemistry and physics. The idea that we can teach students with below-grade level reading skills to become advanced diagnostic technicians is false. Service information is written at the 14th-grade level, so draw your own conclusions. There is no Silver Bullet Solution to the lack of general education. I hope these issues become food for thought for those either beginning or reinventing their careers early in the 21st Century.

CHANGING PARTS
As mentioned above, our current flat-rate pay system was designed over 100 years ago to pay mechanics to change parts. In those days, diagnostics were called “trouble-shooting.” Of course, it didn’t take much knowledge or time to “trouble-shoot” problems on a 1966 Volkswagen and many parts were diagnosed by simply replacing them with “known-good.” 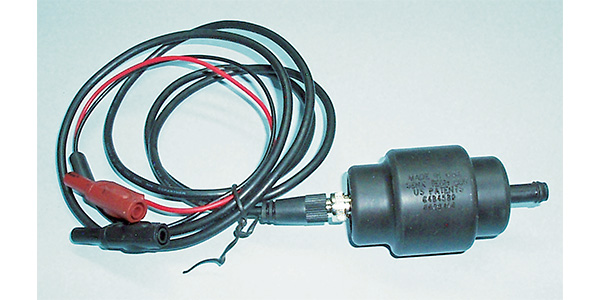 Photo 3: Transducers that measure pressure wave variations in the intake and exhaust systems are useless without the foundational knowledge needed to interpret the resulting data.

Today, the scene is much different. Practically all components parts of a vehicle are electronically controlled and subsequently require advanced diagnostic skills. Advanced diagnostics require long learning curves and continual updating. At present, most of these learning activities take place on the technician’s own time. The “do-everything for everybody” technician is a thing of the past.| 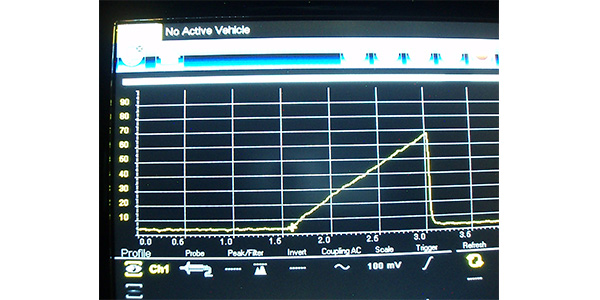 As I write this, it’s becoming more difficult by the day to get an electronics problem accurately diagnosed, even at some well-equipped dealerships. Tooling alone does not an advanced diagnostic technician make (see Photo 3). Quite to the contrary, only the technician, through his own education and experience, makes the tools work as designed. Without intellectual curiosity, foundational knowledge, and STEM-based education to guide the hands and guide the mind, the tools of our trade are useless. The solution to the current shortage of advanced diagnostic technicians is to pay them and they will come. No more, no less. See Photo 4.

Dodging the Silver Bullet with Problem-Solving Skills
Silver Bullet Solutions usually lead us to false conclusions. For this month’s Diagnostic Solution, let’s use foundational knowledge and a lab scope to solve a no-code, intermittent battery drain.
1. We can’t understand what we can’t measure, so let’s turn the battery drain into science-based numbers.
2. Amp probe connected to an ordinary voltmeter, I’m seeing a drain ranging from 3.0 to about 8.0 amps.
3. These numbers can represent any type of drain in the system, including an aftermarket accessory gone crazy.
4. Ok, these numbers won’t identify the source, so let’s get a much clearer view of the battery drain by connecting the amp clamp to a lab scope.
5. We now have a time base data to go with our amperage values.
6. The lab scope shows a clean, vertical line on a square-wave pattern of about 10 amps and 5 milliseconds (ms) on-time. See Photo 2.
7. If we were in a hurry, we might have missed the pulsating signal.
8. But the clean, square-wave pattern indicates that an electronic module is switching the current on/off.
9. Sorting through my foundational knowledge, I know that the scope’s 10-ampere amplitude is likely due to an amperage draw from an electric motor. So why is the drain pulsing on/off?
10. I examine the fuse box and test the voltage drop across the pins of each fuse. Fuse #38 shows the most voltage drop.
11. Fuse #38 controls the rear window wiper motor. The rear hatch module is evidently attempting to force the wiper motor to its “rest” position.
12. This month’s Diagnostic Solution turned out to be a seized wiper arm shaft that caused the wiper to not fully reach its rest position.

Advertisement
In this article:Engine Diagnostics

Dodging The Silver Bullet: How The 21st Century Is Changing Vehicle Diagnostics