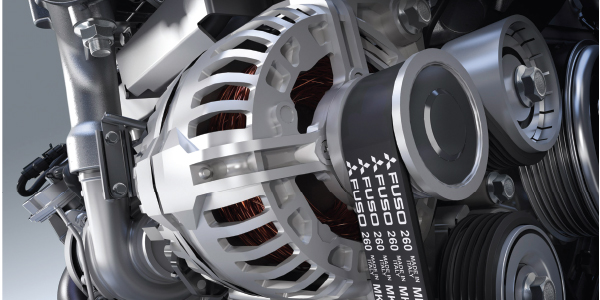 Keep in mind, the alternator is not a battery charger so much as it is a battery maintainer.

The purpose of an alternator is to supply the power needed for all electrical items on the vehicle, plus replenish the battery fully from the last startup. If the battery doesn’t get fully recharged, it will remain in a state of discharge. It will sulfate and become inactive prematurely. Keep in mind, the alternator is not a battery charger so much as it is a battery maintainer.

An alternator that has to recharge a battery that is overly discharged can be overworked, which will shorten its life. This is primarily due to the high amount of heat produced by the alternator during its charging process. The greater the amperage flowing through it, the higher the temperature. So, anytime an alternator is replaced, the battery should be fully recharged or replaced.

An alternator transfers the mechanical energy from the belt into electrical energy. To make this energy transfer possible, the alternator borrows a few electrons from the battery to get the process started. Inside the alternator are two strong electromagnets. One is called a rotor. This rotor spins inside of another electromagnet called a stator. As the poles of these magnetic fields collide, an electrical current is induced into the stator.

The voltage induction grows stronger as the poles approach each other. In contrast, when the poles leave each other, the voltage induction steadily reduces as the poles get further and further apart. In reality, there are three magnetic fields inside the stator spaced 120 degrees apart. They are produced by three separate windings in the stator, providing three times the number of waves shown in the figures. It’s like having three separate alternators inside one housing.

The voltage has to build up to the desired 12 DC to 14.5 DC range. Since the automotive electronics are all presently designed to run in that range, much of the alternator’s output is both useless and jeopardizing to the rest of those components. This is where the battery plays an essential part. Any voltage below the battery’s base voltage is canceled out. Filling in the low places and absorbing the excessively high places in the alternator’s output is how the battery “silences” the electrical noise in the system.

All alternators have some device for voltage regulation. Without such regulation, the alternator could fail to meet electrical demands or could be free to run away and overcharge electrical components to death.

The automotive charging system is one system that is very much the same between makes, yet at the same time, so very different. For some, it’s reasonable to see as high as 16 volts for long periods at a time. For others, it’s reasonable to see as low as 13 volts. For some, a constant 13.6 volts is an indication of a problem. Still yet for others, it’s perfectly normal to see the alternator not charge at all intermittently. Some alternators are controlled only with an internal or external regulator. Some are controlled solely by the PCM. Still others are controlled by a voltage regulator and the PCM. Not knowing what controls what, and how it is supposed to function, can not only cause a misdiagnosis when there is a problem, it can also cause a critical problem to be overlooked.

A voltage test of the charging system is probably the most popular first test to make. As with any electrical device, the most prevalent failure is not to function at all. So, if an alternator has quit working entirely, then only battery voltage (approx. 12 volts or less) will be seen at the battery.

After consulting a wiring diagram, test the light gauge wires at the back of the alternator for battery power. It is entirely possible that the alternator may be charging without that voltage, making it to the battery. After testing for charging voltage at the battery, and not finding any, the test should be repeated at the point where the charging lead meets the alternator. If the charging voltage is present there, the charge lead is “open” somewhere. That might be due to a blown high amperage fuse (some vehicles have them, and some don’t) or possibly a severely corroded cable.

The next logical test is to check the alternator’s peak amperage output. There are many different amperage ratings of alternators. So, the first thing to do is find out what the peak amperage rating is for the one you are testing. This information is often stamped on the side or back of the alternator. However, it may not be viewable with the alternator installed in the vehicle. You can check using an amp meter clamped to the wire at the back of the alternator. You can then add loads to the system by turning on electrical components like headlights, heated seats, and other components that draw large amounts of current. If the belt starts to make noise, you may have found the source of the weak alternator.

Usually, faulty diodes would have shown up as a weak alternator during the peak amps test, but not always. Most battery testers will automatically say diodes “good” or “bad,” or some have a “ripple” meter on them to simplify this check. This check can also be performed with an oscilloscope as well. If the diodes are faulty, they will pass AC current into the vehicle’s electrical system creating a ripple effect on top of the DC voltage.

The idea is to measure this ripple effect. Keep in mind, however, that some ripple effect is average, and the battery has to dampen the ripple. A “failing” reading can be the result of a faulty battery. So, if you see the tester showing “diodes bad,” repeat the test with either a new battery installed, or with an emergency jump start pack clamped to the battery cables before rendering the final verdict.

Also, another thing that should be checked is a scan of the PCM on vehicles where the PCM controls the alternator. Scanning for codes and observing alternator command PIDs are very important in proper diagnostics of those systems.

If communications were lost between the PCM and alternator, the PCM would turn on the “battery” light, but the regulator would still charge the alternator at about 13.6 volts. The PCM would set a trouble code relating to that loss of communication. Imagine trying to diagnose a battery light that doesn’t appear to have any reason to be on. That is, it doesn’t appear to have a valid reason until a scanner is added to the testing.